This New Year’s Day, around 8am, I stumbled across a post from Nigella Lawson on Instagram with a recipe for parmesan shortbreads. Despite being slightly heavy headed, I was inspired to make a batch to go with the hair-of-the-dog-champagne already chilling in the fridge for later. The kids were temporarily pre-occupied with their porridge (and perhaps some name-calling) so I had a window of opportunity, albeit a small one, so I got cooking. Still in my dressing obviously.

Sadly we had no parmesan, but I did find a good lump of cheddar lurking at the back of the fridge (luckily mould-free) and found a slightly different recipe on this blog ‘Raising Sugar Free Kids’ for cheddar shortbread. It was very similar to the Nigella one, but without the egg yolk or need for chilling. I’m happy to report they were a complete success and were absolutely perfect with the champagne, and the kids devoured them too. 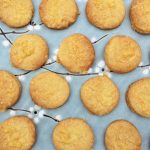 2. Mix together the flour, 50g of the cheese and the butter in a food processor until it forms a dough. Add 1-2 tbsp of milk if needed to bring it together.

3. Roll out the dough on a floured surface to 1cm thickness. Cut out 5cm circles using a pastry cutter (or whatever you might have to hand - I used a shot glass sized baby cup!). Place on the baking tray and sprinkle with the remaining cheese and salt.

4. Bake for 15 mins or until golden. Leave to cool on the tray then serve.

This website uses cookies to improve your experience. We'll assume you're ok with this, but you can opt-out if you wish. Accept Read More

Sign up to our newsletter for 10% off, plus special offers, recipes and flavour hacks.